Kubeflow is a fast-growing open source project that makes it easy to deploy and manage machine learning on Kubernetes.

Due to Kubeflow’s explosive popularity, we receive a large influx of GitHub issues that must be triaged and routed to the appropriate subject matter expert. The below chart illustrates the number of new issues opened for the past year: 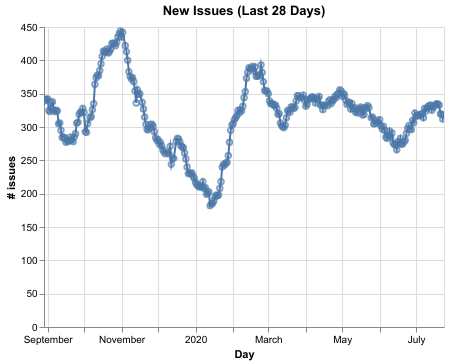 To keep up with this influx, we started investing in a Github App called Issue Label Bot that used machine learning to auto label issues. Our first model was trained using a collection of popular public repositories on GitHub and only predicted generic labels. Subsequently, we started using Google AutoML to train a Kubeflow specific model. The new model was able to predict Kubeflow specific labels with average precision of 72% and average recall of 50%. This significantly reduced the toil associated with issue management for Kubeflow maintainers. The table below contains evaluation metrics for Kubeflow specific labels on a holdout set. The precision and recall below coincide with prediction thresholds that we calibrated to suit our needs.

Given the rate at which new issues are arriving, retraining our model periodically became a priority. We believe continuously retraining and deploying our model to leverage this new data is critical to maintaining the efficacy of our models.

Our CI/CD solution is illustrated in Figure 2. We don’t explicitly create a directed acyclic graph (DAG) to connect the steps in an ML workflow (e.g. preprocessing, training, validation, deployment, etc…). Rather, we use a set of independent controllers. Each controller declaratively describes the desired state of the world and takes actions necessary to make the actual state of the world match. This independence makes it easy for us to use whatever tools make the most sense for each step. More specifically we use

Figure 2: illustrates how we do CI/CD. Our pipeline today consists of two independently operating controllers. We configure the Trainer (left hand side) by describing what models we want to exist; i.e. what it means for our models to be “fresh”. The Trainer periodically checks whether the set of trained models are sufficiently fresh and if not trains a new model. We likewise configure the Deployer (right hand side) to define what it means for the deployed model to be in sync with the set of trained models. If the correct model is not deployed it will deploy a new model.

For more details on model training and deployment refer to the Actuation section below.

A reconciler is a control pattern that has proven to be immensely useful for building resilient systems. The reconcile pattern is at the heart of how Kubernetes works. Figure 3 illustrates how a reconciler works. A reconciler works by first observing the state of the world; e.g. what model is currently deployed. The reconciler then compares this against the desired state of the world and computes the diff; e.g the model with label “version=20200724” should be deployed, but the model currently deployed has label “version=20200700”. The reconciler then takes the action necessary to drive the world to the desired state; e.g. open a pull request to change the deployed model.

Figure 3. Illustration of the reconciler pattern as applied by our deployer.

Reconcilers have proven immensely useful for building resilient systems because a well implemented reconciler provides a high degree of confidence that no matter how a system is perturbed it will eventually return to the desired state.

There is no DAG

The declarative nature of controllers means data can flow through a series of controllers without needing to explicitly create a DAG. In lieu of a DAG, a series of data processing steps can instead be expressed as a set of desired states, as illustrated in Figure 4 below:

This reconciler-based paradigm offers the following benefits over many traditional DAG-based workflows:

Figure 5: To push a new model for Label Bot we create a PR updating the config map storing the id of the Auto ML model we want to use. When the PR is merged, Anthos Config Management(ACM) automatically rolls out those changes to our GKE cluster. As a result, subsequent predictions are made using the new model. (Image courtesy of Weaveworks)

Putting It Together: Reconciler + GitOps = CI/CD for ML

With that background out of the way, let’s dive into how we built CI/CD for ML by combining the Reconciler and GitOps patterns.

There were three problems we needed to solve:

To compute the diffs we just write lambdas that do exactly what we want. So in this case we wrote two lambdas:

We wrap these lambdas in a simple web server and deploy on Kubernetes. One reason we chose this approach is because we wanted to rely on Kubernetes’ git-sync to mirror our repository to a pod volume. This makes our lambdas super simple because all the git management is taken care of by a side-car running git-sync.

To apply the changes necessary, we use Tekton to glue together various CLIs that we use to perform the various steps.

To train our model we have a Tekton task that:

This notebook fetches GitHub Issues data from BigQuery and generates CSV files on GCS suitable for import into Google AutoML. The notebook then launches an AutoML job to train a model.

We chose AutoML because we wanted to focus on building a complete end to end solution rather than iterating on the model. AutoML provides a competitive baseline that we may try to improve upon in the future.

To easily view the executed notebook we convert it to html and upload it to GCS which makes it easy to serve public, static content. This allows us to use notebooks to generate rich visualizations to evaluate our model.

To deploy our model we have a Tekton task that:

The controller ensures there is only one Tekton pipeline running at a time. We configure our pipelines to always push to the same branch. This ensures we only ever open one PR to update the model because GitHub doesn’t allow multiple PRs to be created from the same branch.

Once the PR is merged Anthos Config Mesh automatically applies the Kubernetes manifests to our Kubernetes cluster.

We picked Tekton because the primary challenge we faced was sequentially running a series of CLIs in various containers. Tekton is perfect for this. Importantly, all the steps in a Tekton task run on the same pod which allows data to be shared between steps using a pod volume.

Furthermore, since Tekton resources are Kubernetes resources we can adopt the same GitOps pattern and tooling to update our pipeline definitions.

Finally, we needed to build a control loop that would periodically invoke our lambdas and launch our Tekton pipelines as needed. We used kubebuilder to create a simple custom controller. Our controller’s reconcile loop will call our lambda to determines whether a sync is needed and if so with what parameters. If a sync is needed the controller fires off a Tekton pipeline to perform the actual update. An example of our custom resource is illustrated below:

The custom resource specifies the endpoint, needsSyncUrl, for the lambda that computes whether a sync is needed and a Tekton PipelineRun, pipelineRunTemplate, describing the pipeline run to create when a sync is needed. The controller takes care of the details; e.g. ensuring only 1 pipeline per resource is running at a time, garbage collecting old runs, etc… All of the heavy lifting is taken care of for us by Kubernetes and kubebuilder.

Note, for historical reasons the kind, ModelSync, and apiVersion automl.cloudai.kubeflow.org are not reflective of what the controller actually does. We plan on fixing this in the future.

Build Your Own CI/CD pipelines

Our code base is a long way from being polished, easily reusable tooling. Nonetheless it is all public and could be a useful starting point for trying to build your own pipelines.

Here are some pointers to get you started:

If you’d like to see us clean it up and include it in a future Kubeflow release please chime in on issue kubeflow/kubeflow#5167.

Since we do not have an explicit DAG representing the sequence of steps in our CI/CD pipeline understanding the lineage of our models can be challenging. Fortunately, Kubeflow Metadata solves this by making it easy for each step to record information about what outputs it produced using what code and inputs. Kubeflow metadata can easily recover and plot the lineage graph. The figure below shows an example of the lineage graph from our xgboost example.

Figure 6: screenshot of the lineage tracking UI for our xgboost example.

Our plan is to have our controller automatically write lineage tracking information to the metadata server so we can easily understand the lineage of what’s in production. 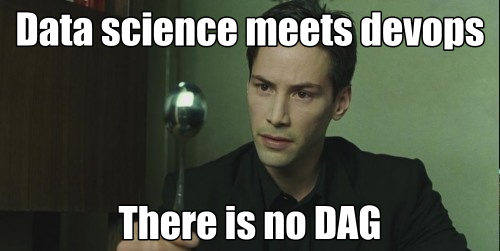 Building ML products is a team effort. In order to move a model from a proof of concept to a shipped product, data scientists and devops engineers need to collaborate. To foster this collaboration, we believe it is important to allow data scientists and devops engineers to use their preferred tools. Concretely, we wanted to support the following tools for Data Scientists, Devops Engineers, and SREs:

If you’d like to learn more about GitOps we suggest this guide from Weaveworks.

To learn how to build your own Kubernetes controllers the kubebuilder book walks through an E2E example.