As machine learning (ML) architectures are increasing in complexity, it is becoming important to find the optimal hyperparameters and architecture for ML models. Automated machine learning (AutoML) has become a crucial step in the ML lifecycle. Katib provides AutoML features in Kubeflow in a Kubernetes native way.

Katib is an open source project which is agnostic to ML frameworks. It can tune hyperparameters in applications written in any language of the user’s choice and natively supports many ML frameworks, such as TensorFlow, Keras, PyTorch, MPI, MXNet, XGBoost, scikit-learn, and others. Katib improves business results by efficiently building more accurate models and lowering operational and infrastructure costs. Katib can be deployed on local machines, or hosted as a service in on-premise data centers, or in private/public clouds.

Katib offers a rich set of features accessible via APIs. By using these APIs, Katib is natively integrated to Kubeflow Notebooks and Pipelines. Katib supports Hyperparameter optimization (HP), Neural Architecture Search (NAS), and Early Stopping. Early Stopping feature can be used without any significant changes in the current Katib Experiments.

Furthermore, Katib is a unique system which supports all Kubernetes workloads and Kubernetes custom resource definition (CRD) to perform Katib Experiments. Since Katib can execute various Kubernetes resources, users are able to run not only ML models optimization Experiments. They can also enhance any software, code or program to make it more efficient with optimization algorithms provided by Katib.

We are continually working on the new Katib UI to provide a better User Experience and native integration with Kubeflow central dashboard. Please check this presentation to know more about the new UI.

All of the above mentioned features allow users to easily integrate Katib in their ML infrastructure pipeline. 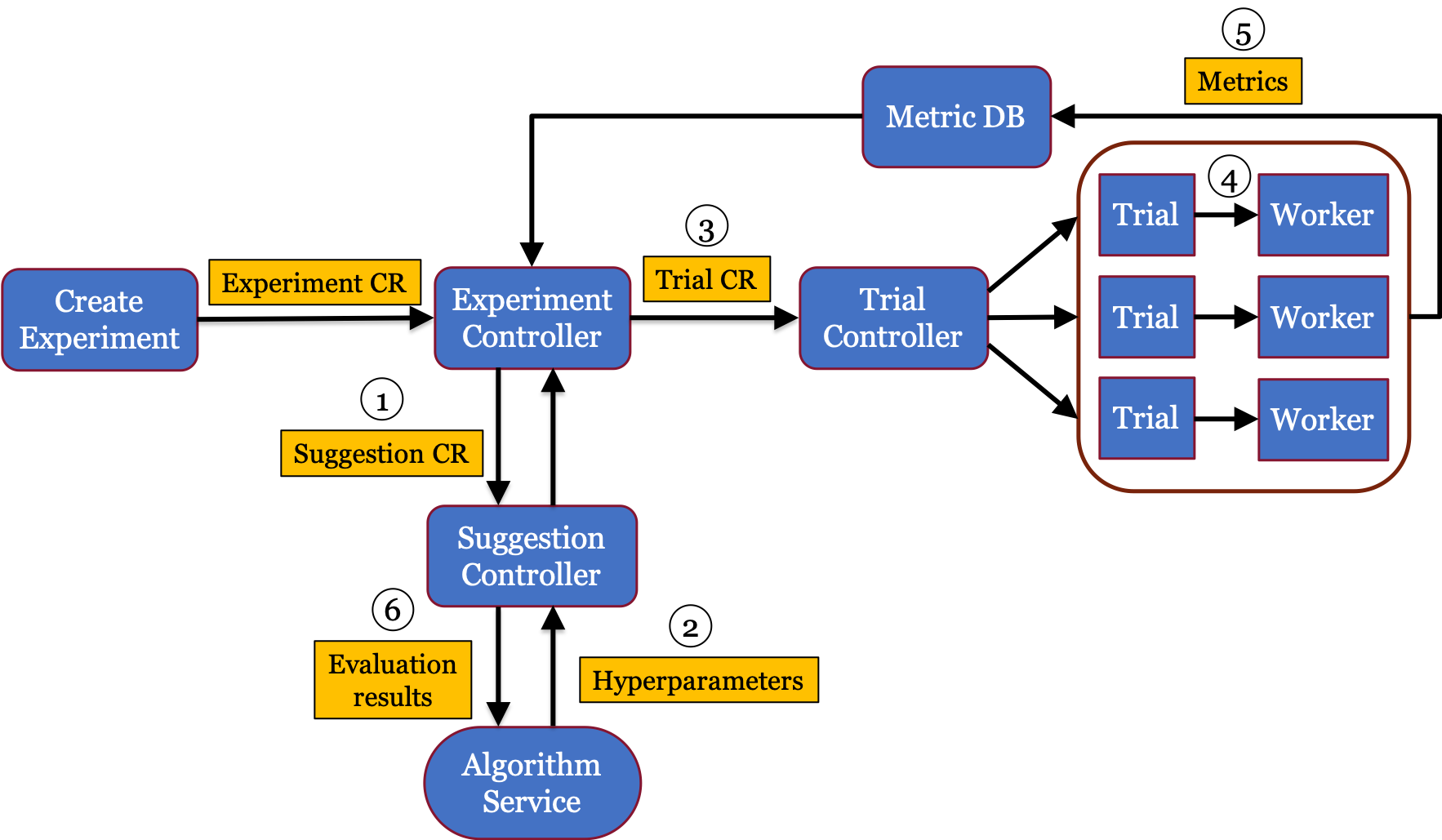 There are 3 main concepts in Katib which are Kubernetes CRDs:

By using above resources Katib follows the following steps, which are marked in the diagram above:

Katib version 0.10 implements a new feature to support any Kubernetes CRDs or Kubernetes workloads as a Katib Trial template. Therefore, there is no need to manually modify the Katib controller to use CRD as a Trial. As long as the CRD creates Kubernetes Pods, allows injecting the sidecar container on these Pods, and has success and failure status, the CRD can be used in Katib.

Here are the motivations behind this feature:

The above problems led to the creation of a scalable and portable solution for the Trial template. This solution allows users to modify Katib components and to add their CRDs without changing the Katib controller image.

Katib now supports Tekton Pipeline and MPIJob in addition to BatchJob, TFJob and PyTorchJob. In the case of Tekton Pipeline, a user is able to build a complex workflow inside the Trial’s worker job. The user also can implement data preprocessing and postprocessing with all of the Tekton Pipeline features. Eventually, Katib’s metrics collector parses and saves the appropriate metrics from the training processes to the database.

To support new Kubernetes CRD, Katib components need to be modified before installing in the Kubernetes cluster. To make this modification, it is necessary to know:

Check the Kubernetes guide to know more about CRDs.

At this point, the Kubernetes CRD can be used in the Katib Trial template. Check this guide to know more about Tekton and Katib integration.

Early Stopping is now supported in the Katib 0.10 release. Early Stopping is one of the essential steps for doing HP tuning. It helps to avoid overfitting when the model is training during Katib Experiments.

Using Early Stopping helps to save compute resources and to reduce the Experiment execution time by stopping the Experiment’s Trials when the target metric(s) no longer improves before the training process is complete.

The major advantage of using Early Stopping in Katib is that the training container package doesn’t need to be modified. Basically, the Experiment’s YAML has to be extended with the new entity - earlyStopping, which is similar to the algorithm YAML section:

Currently, Katib supports the Median Stopping Rule. The Medium Stopping rule stops a running Trial at the step S if the Trial’s best objective value is lower than the median value of all succeeded Trials’ objectives reported up to that step S. Readers interested in learning more about the Median Stopping Rule can check the Google Vizier: A Service for Black-Box Optimization paper.

Please let us know about the active use-cases, feature requests and questions in the AutoML Slack channel or submit a new GitHub issue. To know more about the new Katib UI or to track the current integration process please check the GitHub project. We are planning to arrange a webinar and tutorial session for using AutoML in Kubeflow soon. Please join the kubeflow-discuss mailing list to know more about it.