With increase in the size of dataset and deep learning models, distributed training emerges as the mainstream approach for training neural network models in industry. While it is feasible now to launch a massive distributed training job on Kubernetes with Kubeflow, advanced features like elastic workload and other cost mitigation approaches remain leashed when we talk about deep learning jobs on Kubernetes.

Let’s first recap training deep learning models. When we talk about ‘training’, it refers generally to iteratively optimizing parameters in a neural network model with its gradient descent. Accelerated with GPUs, the training can speed up for 10-100 times.

When manufacturers try to integrate more computational resources like GPUs into a single machine, to hold training experiments with more and more data or model parameters, the cost grows exponentially. Therefore, after initially proposed by Mu Li on OSDI’14, distributed training takes over training on a single machine when researchers play with massive dataset or large model.

For distributed training in data-parallelism, Horovod is widely adopted given its excellent support on deep learning frameworks like TensorFlow and PyTorch, communication optimization and easier programming pattern. In Horovod, all training processes are equal participants, each of which process the gradient calculation and communication.

Because of significant acceleration of training speed as well as the programming pattern that are easier to understand, data-parallelism distributed training, represented by Horovod, is getting more and more attention. However, there still remain some issues:

Researchers and engineers proposed Elastic Training as the key to solve the puzzle.

Elastic training appears a perfect match to public cloud. Combined with spot instances, we cut the cost for GPUs from ¥16.21/hour to ¥1.62/hour, reducing the overall cost for the training job by nearly 70%. Under the same budget, elastic training employs more GPUs and accelerates the training speed by 5 to 10 times.

MPI-Operator is designed to deploy Horovod jobs on Kubernetes. While the operator releases multiple versions, the general idea stays unchanged. It includes: 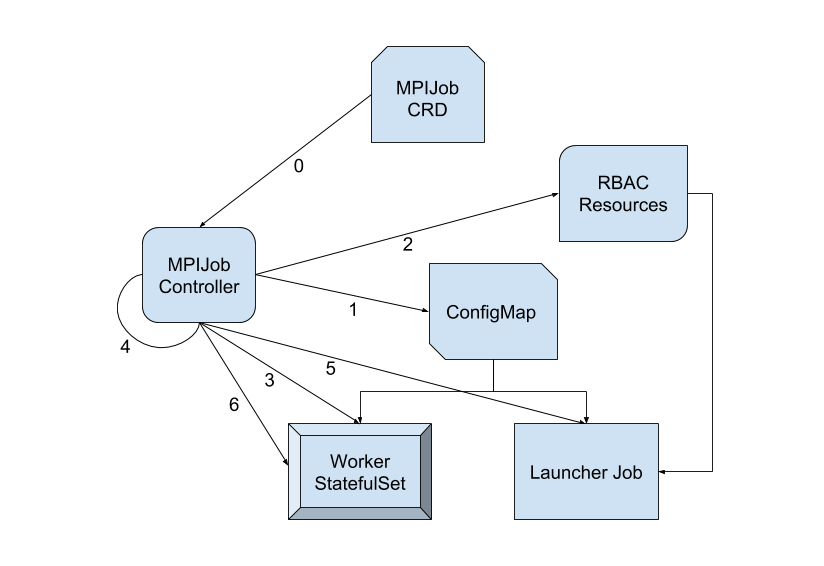 To address these compatibility issues, we pushed multiple pull requests regarding Horovod and MPI-Operator, including mpi-operator-pull-335 and horovod-pull-2199. As providing an MPI-Operator-specific discover_hosts.sh is most critical to the launcher pod for Elastic Horovod, we consider two scenarios for converting worker pods with a Running phase into a discover_hosts.sh script.

Scenario 2 changes the delivery image instead of the controller. However, as we cannot limit how frequently users will execute the discover_hosts.sh script, it poses a potential threat to the APIServer, especially when the count of worker pods is massive.

An fixture to scenario 2 is to replace the kubectl with a podLister process, removing extra stress from the APIServer. In this way, we install two processes in launcher pod but lack a proper mechanism to keep the podLister alive. Once the podLister dies, there leaves no elasticity for the training job.

Therefore we choose the first scenario and map the disocver_hosts.sh under /etc/mpi/. We also fixed the other compatibility issues after the worker replica configuration changes. For users choose non-elastic mode, just simply ignore /etc/mpi/discover_hosts.sh.

Concerns comes to scenario 1 as well. There is a delay between the ConfigMap and what horovodrun sees from the discover_hosts.sh in the launcher pod. This delay, on one hand, can be tweaked by cluster admin and on the other hand, can be considered as tiny compared to the training elapsed time or the time for Elastic Horovod to handle worker changes.

We present a demo to show how to operate an Elastic Horovod job with MPI Operator.

The job is created with two workers. After the training begins, we change MPIJob.Spec.MPIReplicaSpecs["Worker"].Replicas to 3, adding another worker. Let’s check how the discover_hosts.sh changes:

We reduce the replica count to 1, retrieving 2 worker instances.

As we can see, Elastic Horovod on MPI-Operator now supports tweaking worker replicas dynamically. As a future work, we aim to support Horizontal Pod Autoscaler to MPIJob as well as other features like designated worker deletion.

When the concept of cloud native and distributed training fuse to elastic training on Kubernetes, it lowers the cost and gives robustness and flexibility. As a team, we are working with PyTorch, Horovod and other communities to propel elastic training. We wish to further introduce our work on elasticity with PS/Worker training mode, optimization for resource and job priority and other topics on cloud native AI.